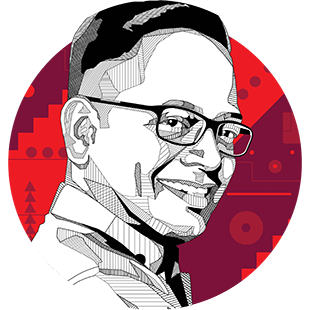 From speaking various dialects across Maharashtra to tasting all types of authentic food across Maharashtra, Sandesh is a typical “Marathi Manus”. They say ‘Humor is by far the most significant activity of the human brain.’ Going literally parallel with this saying and being honest to his witty personality, Sandesh has the most successful how to his credit in Marathi Entertainment – ‘Chala Hava Yeu Dya’. It’s a comedy nonfiction show running successfully since last 5 years. Starting with conceptualizing the show till prompting lines to the artists, he has played all types of roles while making this show a great success.

Apart from this, he has also created shows in other genres like singing, dance, quiz, and variety entertainment like BIGG BOSS. Being an ardent fan of Marathi Cinema, he has also contributed in its paradigm shift from it being a loss making affair to touching the 100 CR club. He has worked on various Marathi films like Kaksparsha, Duniyadari, Lay Bhaari, Sairat etc. Starting with content marketing for films, Sandesh has got into creative aspect of the films in his overall experience over 12 years.

Just like a hardcore Maharashtrian, reading Marathi books and watching Marathi plays is what makes Sandesh happy apart from his work. Having said that, Films still remain as his ultimate source of contentment which makes him to do the persistent search of stories that can be adapted into films. Overall, one can describe Sandesh as a person who has been a constant learner of the pulse of Marathi audience.